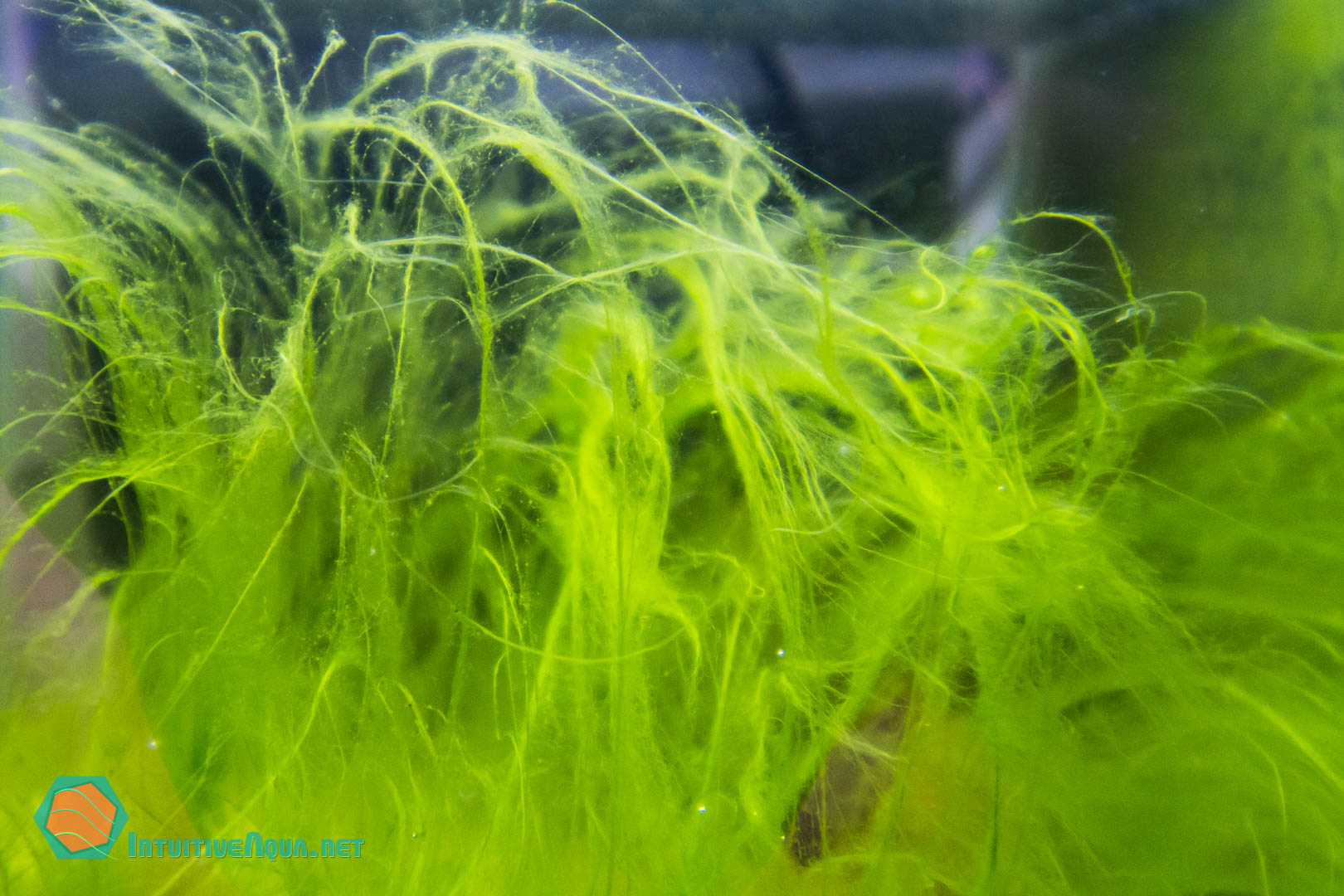 Mysterious Liquid Carbon: An experiment on the effect on aquarium plant and algae growth
19/04/2020

Few details are given about the exact contents of ‘Liquid carbon’ solutions. Over 45 days, we compared the plant and algae growth in an aquarium receiving liquid carbon against one not receiving any supplement and one aquarium with injected CO2. The plant growth in the tank with liquid carbon was minimal compared to the control tank. Liquid carbon is no replacement for actually injecting CO2 in your tank. It may be able to help start up a low tech tank but other practices are better at limiting algae growth or cheaper in providing actual CO2.

‘Liquid carbon fertilizer’, ‘bioavailable organic carbon’, ‘liquid CO2’ are not new products on the market with many common brands offering products claiming to provide an ‘alternative to CO2 injection’. Going over the claims of different products has been and will be covered in other places on the internet. To give suitable details about the experiment I will just mention a few details.

Liquid CO2 is possible and is found for example: in the bottle of a pressurized CO2 system. The pressure inside the cylinder is usually 57 bar at 20 °C. The liquid inside the thin plastic bottle sitting on the shelf is not liquid CO2, it is a mixture of organic chemicals and water. 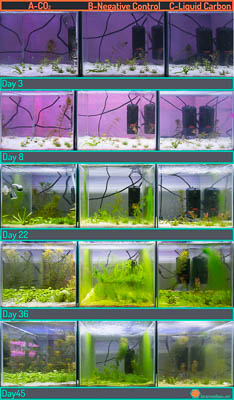 Progress of the experimental tanks for 45 days. Left to right: with CO2 injection, without additional CO2, with liquid carbon.

A second theory is that the ‘bioavailable organic carbon’ is broken down by bacteria generating CO2 in the process. Under aerobic conditions, an assessment report published by ECHA (European Chemicals Agency) provides a half-life of 1.25 days at 12°C (2). This is more likely what is happening. One could point out that a sugar solution will have the same ‘bioavailable organic carbon’. The concentration of CO2 generated by this breakdown in an open aquarium is also likely very small. In the end no studies were found tracing the uptake of 'liquid carbon' by fully submersed, intact plants.

So ,in the end, the aquarist has a bottle of an unknown mix, with little scientific literature or studies showing that the unknown chemicals are able to enter the plant and provide carbon to it. What remains then is to see if the product actually works in aquariums.

The aim of this experiment was to observe the effects of dosing ‘liquid carbon’ on plants and algae in a planted tank in comparison with a planted tank where no additional source of CO2 was added and a planted tank with injected CO2. This is not a guide to starting a low-tech tank. 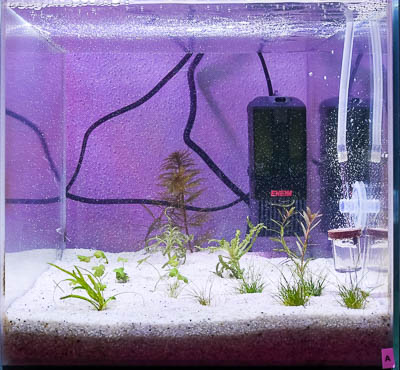 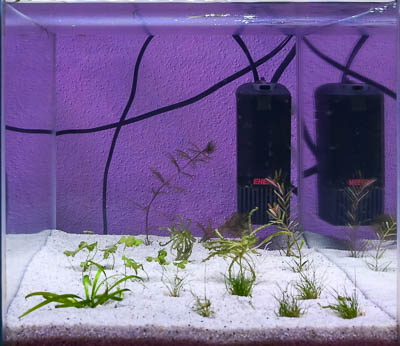 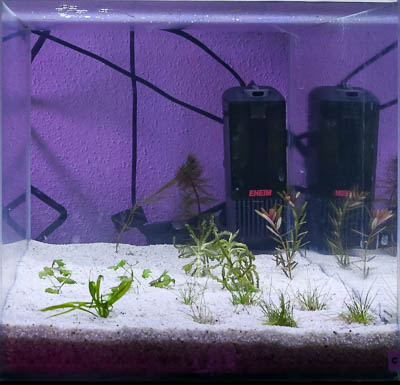 After 22 days the algae were cleaned from the glass, sand and plants in all the aquariums. 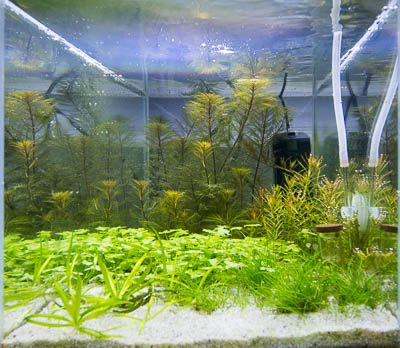 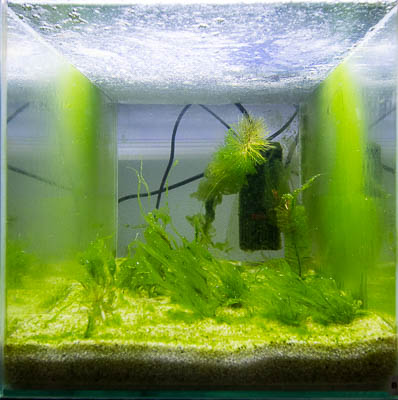 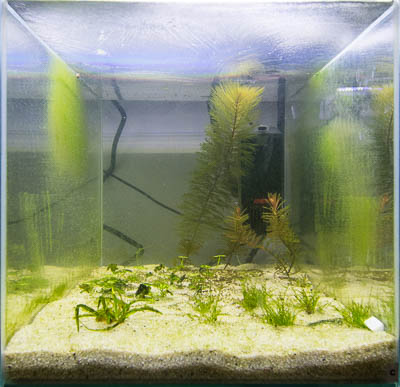 The experiment was stopped at day 45. The most abundant and healthiest plant growth was in the tank with injected CO2 (A – positive control). The aquarium without any extra source of carbon (B - negative control) was overall the most impacted by algae growth with very little plant growth. Although ‘liquid carbon’ was added to this tank for 9 days at the recommended upper limit it was not enough to stop hair algae re-growth on the plants and dust algae on the walls. The aquarium with dosed ‘liquid carbon’ (C) seemed to have reduced algae growth. After 9 days from stopping the dosing of ‘liquid carbon’, there seemed to be more diatoms growing. Plant growth overall was healthier and marginally more than the negative control.

In comparison to the negative control, the following were observed:

In comparison to the positive control we can say the following:

The plant selection for this experiment was aimed at fast-growing stem plants that are not very light-demanding or require special water parameters. They are easy to medium stem plants. With light in sufficient amounts and enough nutrients for their needs, a source of carbon would become the limiting parameter. The P.helferi was emersed and in pretty rough shape and melted in all three aquariums so nothing can be said there.

I intentionally started with a somewhat reduced number of plants for three reasons. Estimating that the project will take a relatively long time until completion, space would be needed for the growth of the plants. Otherwise, I would have to pull plants out, making the comparison between the tanks harder. The second reason is the reduced demand on the already limited amount of CO2 in the tanks without injected CO2. If you consider the entire aquarium as a reservoir of CO2, two plants will use up that amount faster than one. This is less of a problem in a tank with injected CO2 as there are always high levels, and they continue to be renewed. The third reason being that the plant density is somewhat similar to what is seen in many tanks when a person buys a few pots. The lower amount of plants however, had a detriment, more chances of algae.

In the tanks without injected CO2 , a lot of growth occurred during the first 3 weeks. This may be linked to the plant's internal reserves of sugars being used up in this period. Many often report similar experiences in the first weeks after bringing a plant from a nursery; only to be followed by a sudden collapse or lack of growth. 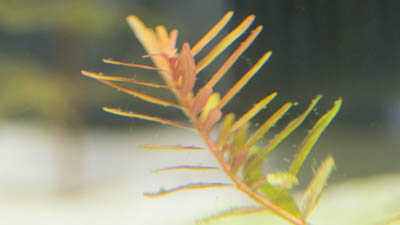 Image 7 Rotala rotundifolia H'ra from the aquarium without CO2 injection 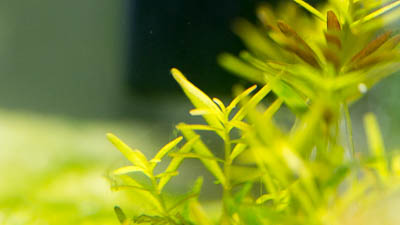 Image 8 Rotala rotundifolia H'ra from the aquarium with CO2 injection

The color of Rotala rotundifolia “H’ra” should also be discussed here. In this case, the red color of the plant is not a sign of healthy growth but stress. The stronger red color was seen in the tank without CO2 injection and in the tank with liquid carbon. In particular, the light was too strong for the available CO2 for photosynthesis. The light energy was there but the plant had no use for it because one of the raw ingredients was missing (CO2 ), so it decided to block some of that light. In similar light levels with CO2 the color was yellowish /green showing that indeed this was an effect of CO2 limitation. 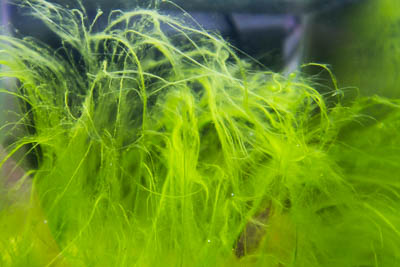 Image 9 Hair algae from the aquarium without CO2 injection

A PPFD of 70 µmol⋅m-2⋅s-1 at the center and 40 µmol⋅m-2⋅s-1 at the edges would be considered medium to high light, depending on whom you ask. Light is certainly the abundant factor for the aquariums without injected CO2 . It contributed to algae growth. You can trace the light intensity coming down on the walls of the aquarium, with the most intense growth at the top center. Even in the tanks with CO2 injected, algae was present in the first 3 weeks until plants became dominant. In fact, if you look at the substrate you can see how algae would not grow in the shade of plants. Plant dominance never occurred for the tanks without CO2. However the lower amount of hair algae in the tank with ‘liquid carbon’ is a nice result. It might just be enough to reduce algae growth during the setup phase until the plants get established and grow in mass and numbers.

The overall effect and use of ‘liquid carbon’

When it comes to the comparison with injected CO2 , the results are pretty clear: ‘Liquid carbon’ is not a replacement for a proper CO2 supply. Although there is a bit more growth in the tank with dosed ‘liquid carbon’, the difference over 45 days is so minimal that in my opinion, it is not worth the effort and cost. And the cost is one understandable reason why one would avoid a pressurized system. For smaller aquariums, a DIY CO2 kit based on yeast-sugar or citric acid-bicarbonate will cost you about the same. Couple it with a passive diffuser and you will have actual CO2 for cheap.

It then comes down to algae reduction. Is dosing Easy Carbo the best way forward when dealing with an algae issue? Arguably not. For the tanks in the experiment, lowering the light and increasing the plant mass would have been much easier fixes. Adding algae-eating animals, like snails, Amano shrimps or fish (if the tanks were larger) would be a much more enjoyable approach for the home aquarium. As this was an experiment, we tried to keep animals out.

Once the algae were established dosing ‘liquid carbon’ at the highest recommended dose did not kill the green hair algae, did not completely stop it from growing. What remains then is the use in spot dosing.

‘Liquid carbon’ is no replacement for actually injecting CO2 in your tank. In this experiment, over 45 days the plant growth improvement was minimal. It may be able to help start up a low tech tank. With good planning and care, starting up such a tank should not require it. In this experiment, it was also not very effective at stopping algae growth completely when dosed at the maximum recommended dose.

Helanthium tenellum, Hydrocotyle tripartita , Myriophyllum sp. ‘Roraima’ and Rotala rotundifolia “H’Ra” were taken from the same aquarium with Estimative Index dosing and injected CO2 and divided in equal parts in the three aquariums. Pogostemon helferi was added from an emersed pot. Eleocharis acicularis ‘mini’ was obtained from an in vitro culture.

When reaching the surface of the water, the plants were trimmed leaving three visible nodes above the substrate. Plants were also trimmed when extending outside their growth area. No plants were removed.

Fresh sand was added to three 25 L aquariums form the same bag. Eheim pickup 45 internal filters were used for filtration. RODI (reverse osmosis de-ionized) water was remineralized to a GH of 6 °dH and a KH of 3 °dH using MgSO4*7H2O, CaSO4 and CaCO3. Each week, half of the water in the aquarium was changed.

The ‘liquid carbon’ supplement used in this experiment wasEasyCarbo dosed at the recommended daily dose for heavily planted aquariums (1 ml for 25 L). The concentration of CO2 in the positive control was set at a target of 30mg/L during the ligth period.

Questions? Ask us
The author of the article declares no potential conflicts of interest at the moment of writing this article. Updated information for the last 5 years can be found on the About page